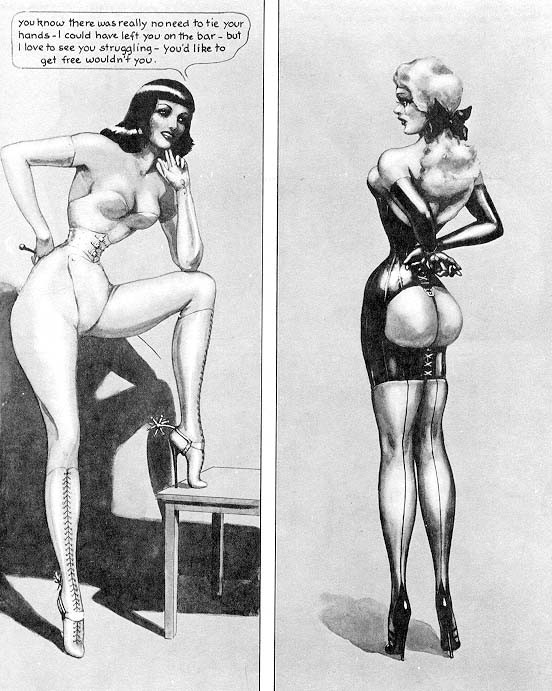 For those of you who don’t already know his work, John Willie was a illustrator in the 1940′s and 50′s. In the mid 1940′s he moved to New York to publish Bizarre Magazine whose front covers have now become iconic and which included letters from readers on such eclectic topics such as high heels, amputee fetishism, transvestitism and corsets.

The above illustration is from the comic book by Willie Sweet Gwendoline, in which the hapless heroine Gwendoline finds herself time and again in bondage which just happens to show off her ample curves and bosom to perfection. Sometimes her she finds herself restrained by her the evil villain Sir Dystic D’Arcy. On other occasions she is tied up “entirely for her own good” by Agent U69 who is fighting Sir Dystic D’Arcyand other no-good sorts. Clearly if this dizzy blond was left free to walk around and use her hands etc she would just get herself into even more trouble! One feels if there was ever a film made a young Pamela Anderson would have been perfect in the role!

John Willie’s illustrations, at once fetishistic and elegant, infused with glamour of the 1940′s and 50′s, had a huge influence in shaping me as a Mistress.  It is different horses for different courses and some ladies feel fabulous donning a second skin of latex. For me, however, it is wearing the vintage lingerie, corsets, pearls and seamed stocking of a John Willie illustration that transforms me into Miss Myers and means my word is law (well for the next hour or so at least…)

2 thoughts on “Naughty but Nice – The Fabulous John Willie”